St George’s Gardens was one of the first burial grounds to be established away from a church. The land was bought in 1713 to serve the parishioners of two churches, St George the Martyr, Queen Square, and St George’s, Bloomsbury, the latter (then still unbuilt) by the great architect Nicholas Hawksmoor.

The plot of just over a hectare lay out in the open fields, well to the north of Bloomsbury. It was divided in two by a wall demarcating the two parishes. Rocque’s map from 1746 shows the early layout.

To begin with, families were reluctant to have their relatives buried so far from town. But an influential churchman, Robert Nelson, decided to be buried there and soon others followed. By 1725 there were around twenty burials a month. A few were marked with impressive monuments and chest tombs but most burials were in unmarked graves. The only indication of where people were buried was given by numbers on the pillars around the walls. By the early 1800s the burial ground was already in a very bad state and by 1855 overcrowding forced its closure. As many as [ ] people are buried here altogether, in ground that is still consecrated.

Thirty years later the garden was reopened, in two stages, as a public garden. It was a pioneering example in a movement which aimed to make the many overgrown urban graveyards into ‘open air sitting rooms’ for the poor, in the words of housing reformer Octavia Hill. William Holmes who designed the garden united the two burial plots and gave it a typically Victorian air, with meandering paths and lawns.

The already mature London plane trees remained, along with the chest tombs and monuments. Headstones were put against the walls. Thanks to local resident John Alsop, we have a postcard from the time. 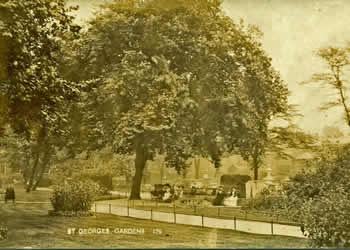 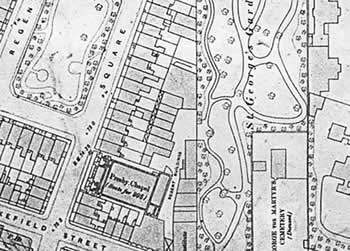 A more recent image of the Gardens has also been found, thanks to the Prints and Drawings Department of the British Museum. The image was produced in 1935 by the artist Cynthia Burnley. We are very grateful to the British Museum for the image but we have as yet been unable to trace the copyright holder.

Damage in World War II led to the loss of the Board School and Prospect Terrace at the east end, but otherwise the tiny park has remained little changed to the present day, undisturbed by traffic and an oasis of calm for the local community.

Lying in the shadow of the Foundling Hospital, St George’s Gardens, though but a stone’s throw from the busy streets of Bloomsbury, are as quiet a corner as any philosopher could wish to find. Tall buildings shut the ground in on all sides, and the weather-worn tomb-stones that line the walls and are scattered through the grounds help to give the place an aspect of unbroken peace and quietness. There the surroundings have a history. On the eastern side rises a Board school in the familiar red brick, where once was that notorious preparatory school for Newgate known as Catsmeat square. To the south a low wall marks the boundary between the parishes of St. George’s Bloomsbury, and St George-the Martyr, Holborn, and on the other side of that wall is a piece of ground which it is desired to add to the garden. There, too, in a corner stands a famous school of anatomy and near it is a cottage that was the scene of a moonlighting outrage in Queen Victoria’s Jubilee year: the tenant, Mr Walker, being twice fired at as he sat by the window reading, the pellets lodging in the woodwork. Mr Walker was a working man with a taste for politics, and a fearless opponent of Home Rule, but whether the outrage had its origin in politics or in private matters was never clearly ascertained.

The ground was originally set apart in the reign of Queen Anne for the cemeteries of St George and St George-the-Martyr, and after Culloden it received the mangled remains of ten unhappy Jacobites, who were hanged, drawn and quartered at Kennington common. Among these victims was James Dawson, the hero of one of Shenstone’s ballads, who was engaged to be married on the day of his execution. The terrible sentence had scarcely been carried out when his sweetheart, who had insisted on following the sledge to Kennington, fell back in the arms of a friend, exclaiming, “My dear, I follow thee. Lord Jesus, receive our souls together,” and immediately expired.

Thanks mainly to the public spirited actions of the Kyrle Society, backed by the Vestry of St Pancras, the old burial ground of St George’s was laid out as a public garden and was opened by Princess Louise, then Marchioness of Lorne, on July 1, 1884. There was some trouble in acquiring the neighbouring burial ground of St George-the-Martyr, but five years later it also was obtained and added to the gardens. Some of the tombs are of more than passing interest. Here were buried Richard Cromwell’s favourite daughter, Macaulay’s father, Jonathan Richardson, the painter; Robert Nelson, author of the ‘Festivals and Fasts’; Nancy Dawson, the hornpipe dancer at Old Drury; and Eliza Fenning, a cook, who was hanged at Newgate in 1815 for attempting to poison the Twiner family in Chancery Lane.

Gardens of gruesome history, from the Islington Gazette, 18 July 1972

Next week a bouquet will be left in the two-and-a-half acre St George’s Gardens, King’s Cross, to commemorate the execution on July 30, 1745, of more than a dozen Jacobites.

Every year about this time the floral tribute, bearing the simple tribute ‘in memory of the brave Jacobites who were murdered for their beliefs’ has been left in the gardens by an unknown person.

St George’s Gardens are now a popular venue for overseas visitors staying at hotels in the area, for many famous people are buried there. They include Anna, the sixth and favourite daughter of Richard Cromwell, the second Protector of England, and Zachary Macaulay FRS, the father of Lord Macaulay, the eminent historian. The burial ground, which formerly belonged to the Church of St George the Martyr, Holborn, was opened as a public garden by the Marchioness of Lorne in July 1884.

They also have a claim to notoriety – for it was here that the first indictment for stealing a body for dissection arose. In a trial heard at Westminster before Judge Sir John Hawkes in 1777, the gravedigger, John Holmes, and his assistant Robert Williams, were arraigned, charged with stealing the body of Jane Sainsbury. The court heard that Williams was stopped in the King’s Cross area carrying a sack and when asked what was in it replied “I don’t know”. The court was told: “The sack was untied and found to contain the body of a woman, with the heels tied up tight behind her, the hands tied together behind, with cords round the neck, so as to almost forcibly bend the neck between the legs.”
The graveyard was searched and it was discovered that the coffin from which the body had been removed was buried only six inches below the level of the ground. While the search was going on, Holmes was detected hiding several pieces of the shroud in his pockets. The two prisoners were found guilty of stealing Mrs Sainsbury’s body and were each sentenced to six months imprisonment. The Judge added, ‘During the last week of your confinement you will each be severely whipped from Kingsgate Street, Holborn, for a distance of half a mile to the Seven Dials’.